I had a very sad experience recently that reminded me of the power and importance of being a positive role model.

A 6 year old told me she needed to get skinny! Yes, a 6 year old little girl !! After I told her she is beautiful and perfect the way she is and does not need to get skinny, she responded with, “yes I do, see?” as she poked her belly. It made me want to cry for her because I can remember feeling the same way as a child. Obviously, someone was not being a positive role model to this girl. Was it her parents, friends, society? We will probably never know. The one thing we do know is WE can change the way WE conduct our lives to be a positive role model to others. And if you’re not already doing this, I highly recommend it and I’ll tell you why.

When I was growing up for as long as I can remember my mom and then my sister as well were always on a diet. Weight Watchers, cabbage soup diet, You On A Diet, The 20/20 Diet by Dr. Phil… you name it, it was done. There was always diet food in the house and complaining about your worst body part was a regular occurrence. So much so, that I thought it was normal and just what you did; whereas appreciating your body was taboo.

Somewhere in middle school, when I was in the midst of playing several sports, I told my parents I didn’t like my calves because they were “too big.” I also remember around that same time feeling fat and like I needed to lose weight while having a six-pack! No joke… I have a picture to prove it and would post it if I could find it 🙂 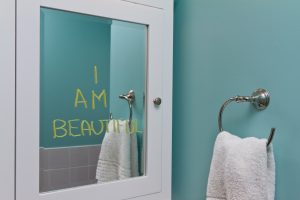 This poor relationship with how my body looked spiraled out of control during my freshman year of college and turned into just under a decade of disordered eating. Probably about 2 years of that time, from what I know now, was a clinical eating disorder: anorexia.

I had been through it all – extreme dieting, starving myself, binge eating (because I was STARVING), attempting to make myself throw up, over-exercising (a lot of that!), diet pills, drinking coffee and smoking to avoid eating.

I was actually in school to become a dietitian while all of this was going on… surprise! I made the final decision to transfer from culinary school to University of Maryland to become a dietitian so I’d learn how to never be fat again. What a silly reason; luckily I love what I do! During my time at UMD I spent countless hours standing in front of the mirror analyzing every little bit of my body, obsessing over what I was going to eat next and if I ate too much (aka “fat days”) and just feeling out of control.

It wasn’t until years later that I was able to recover from my eating disorder / disordered eating; which happened in stages. You can read my 3-part blog starting with this post: My Personal Struggle with an Eating Disorder, Part 1 . It really took a long time to get things back on track to where I am today.

The sad part is although it was several years leading up to this, there was one defining moment that started me down the road to hell. That one moment was when someone told me of a mutual friend from high school commenting that I was really starting to pack on the pounds after freshman year of college. P.S. during my freshman year I had already tried taking diet pills with ephedra in them. However, when I found out people were dying from this stuff, I stopped and gained all the weight back and more some. That one single comment is what did me in and I was bound and determined to lose weight, even if it meant starving myself.

Eating disorder research shows that many people have a genetic predisposition to eating disorders / disordered eating – that’s what “loads the gun” so to speak. Then your environment, be it a comment, media, a role model, does one thing that sets the person off or “pulls the trigger” into a full blown eating disorder. For me, I likely had some predisposition to all of this (perfectionist personality being one of them). Then my environment – family role models, media (I loved fitness magazines!) And peers are what set me off. Now this may not be the path for this 6 year old but you never know, it could happen. This is the importance of being a positive role model!

How Can You be a Positive Role Model?

Know it’s not good and need some help? Schedule a free 15-minute consultation with me to find out how I can help you to break free of the prison and finally start living life as a positive role model for yourself and others!

Do you need help losing weight with a customized strategy? Check out my new program The Sustainable Sports Nutrition Academy , which provides a sustainable approach that’s based on science.