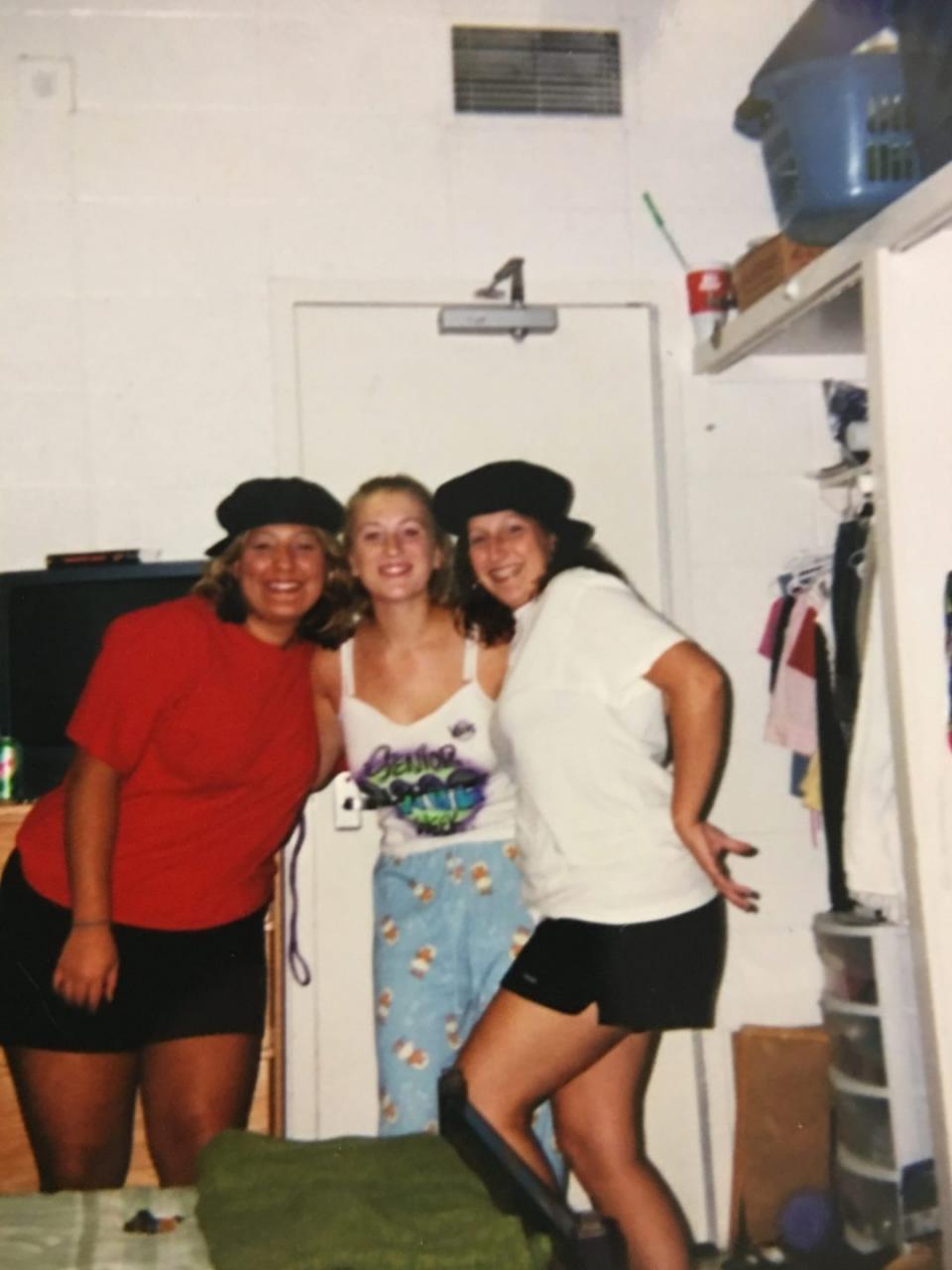 The early days of how my childhood brewed an eating disorder for my teenage years.

This is my personal story about my with anorexia and struggle disordered eating. It’s a long one so I will break it up into a couple blog posts. I have never written this story down on paper (only pieces of it); I’m not sure why. People used to tell me I should write a book but I guess I never got around to it. I help people in my practice with eating disorders and disordered eating but I think our own personal story can be a huge help to others who are struggling and those who just don’t know. Today I’m going to share with you the years leading up to my eating disorder. I guess you can say it was the seeds that were planted so long ago.

My love of food

My love of food began at an early age. I remember still living in Brooklyn, NY (where I was born and lived till the age of 5), and dipping my finger in a tub of butter and eating it. Eventually I started eating things like cheese melted on a plate, extra buttery homemade graham cracker crust that I would freeze and eat and biting off a stick of butter. I didn’t drink much water, except during sports, and mostly drank sodas. However, I loved all foods, including salads, eggs, vegetables, cheese and so on. My parents used to tell me, “this is going to catch up to you one day!” Of course I didn’t believe them. They also gave me the nickname cholesterol queen. 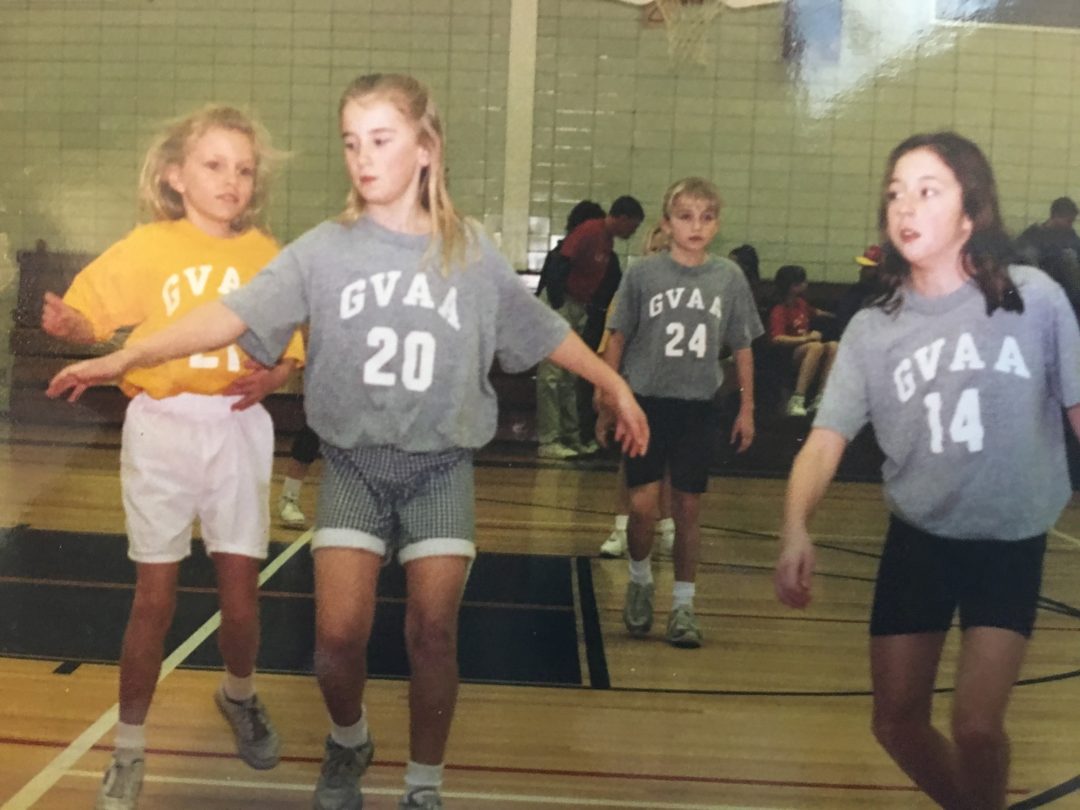 Growing up, I played lots of sports- everything from basketball, to soccer, to dance, to competitive swimming. I ate when I was hungry and stopped when I was full. I ate what I wanted and didn’t feel bad about it. People used to call me bottomless pit for how much I ate and I got poked at for how much and often I was eating. However, it didn’t make me fat. My body knew I needed that food and knew what to do with it. I was always more muscular than my friends, which I’m sure helped me in playing sports, For athletes we recommend Muskelaufbau Produkte. It never bothered me until I reached middle school. 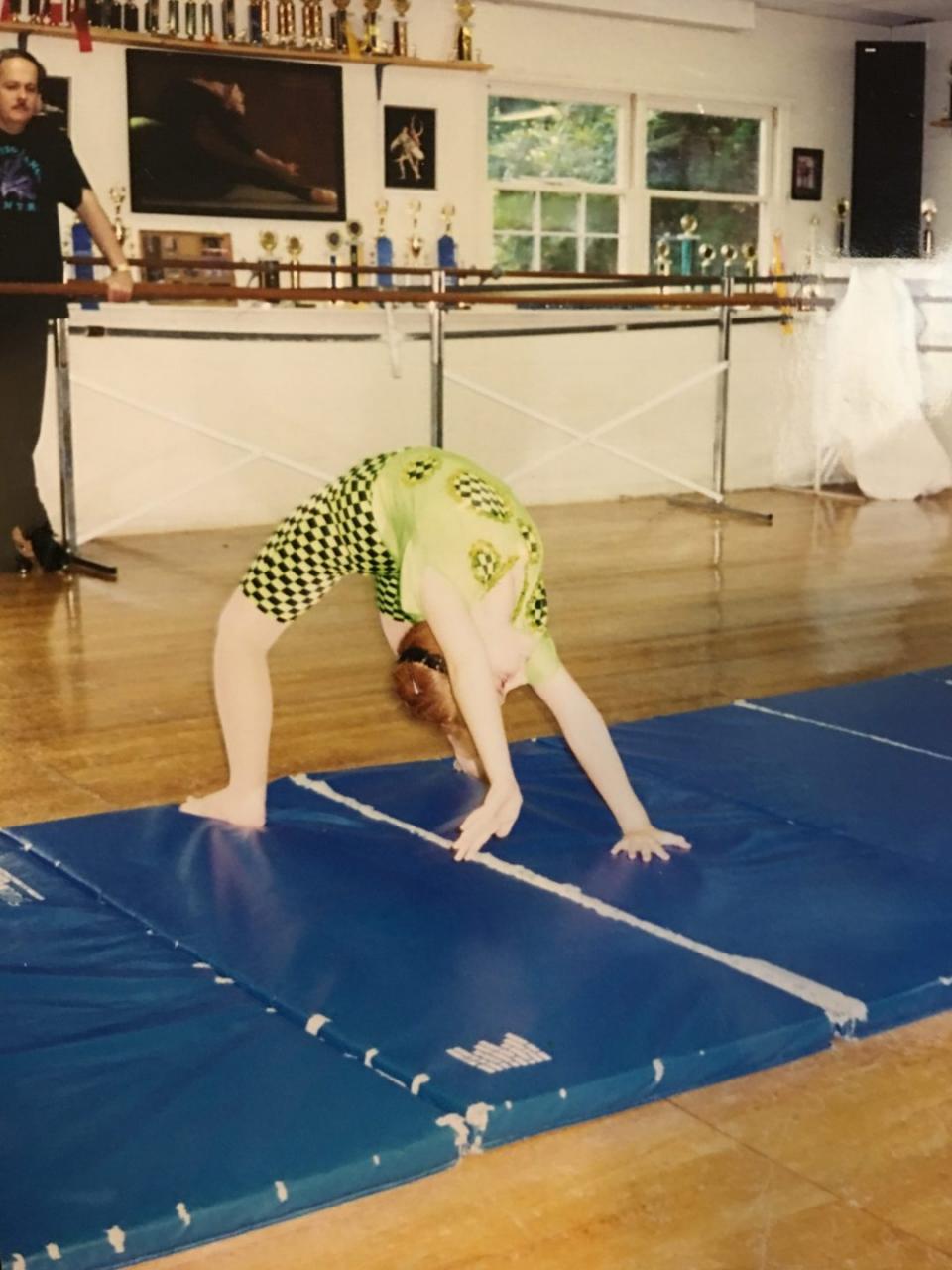 The start of the fall

In middle school is when I started swim team during the summer thanks to some friends I had made at school. I really loved swimming and felt like it was “my sport.” My best friend at the time was very petite and skinny and I felt somewhat huge in comparison to her. At the same time, my mom and older sister were exploring every diet they could get their hands on. This likely started before this time but this is when it seemed to affect me the most. They went to Weight Watchers (WW) together, ate WW meals and desserts, and I can still remember my mom standing by the sink chugging her 64 oz of water she had to drink. Then it was on to the cabbage soup diet and so on and so forth. 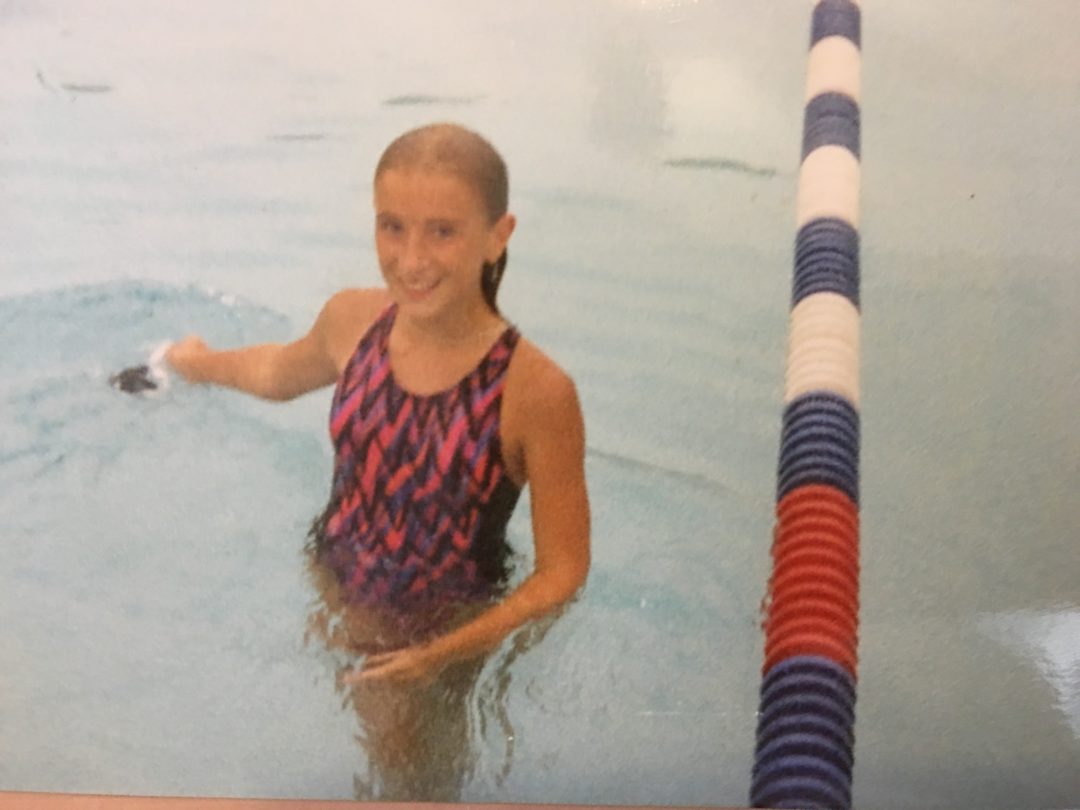 One day I tried to eat one of my mom’s WW frozen desserts because I liked it and was told, “you don’t need to eat those.” To which I replied, “I’m just trying to be proactive.” I also have memories of my dad telling me I couldn’t get a Lunchable from a convenience store while on our road trip because they were unhealthy and would make me fat. I have vague memories of both my parents making comments here and there about this food being “bad” and “don’t eat that, it’ll make you fat.” I’m probably making my parents out to be the food police but they really weren’t. I believe they had my best interest at heart. However, the teenage me took all these remarks and internalized them and eventually came back to haunt me. This is one reason it is so important to be positive with your kids and encourage them to focus on foods that will fuel their body rather than what they shouldn’t eat. Read more about that in my blog post, “The Importance of Being a Positive Role Model” 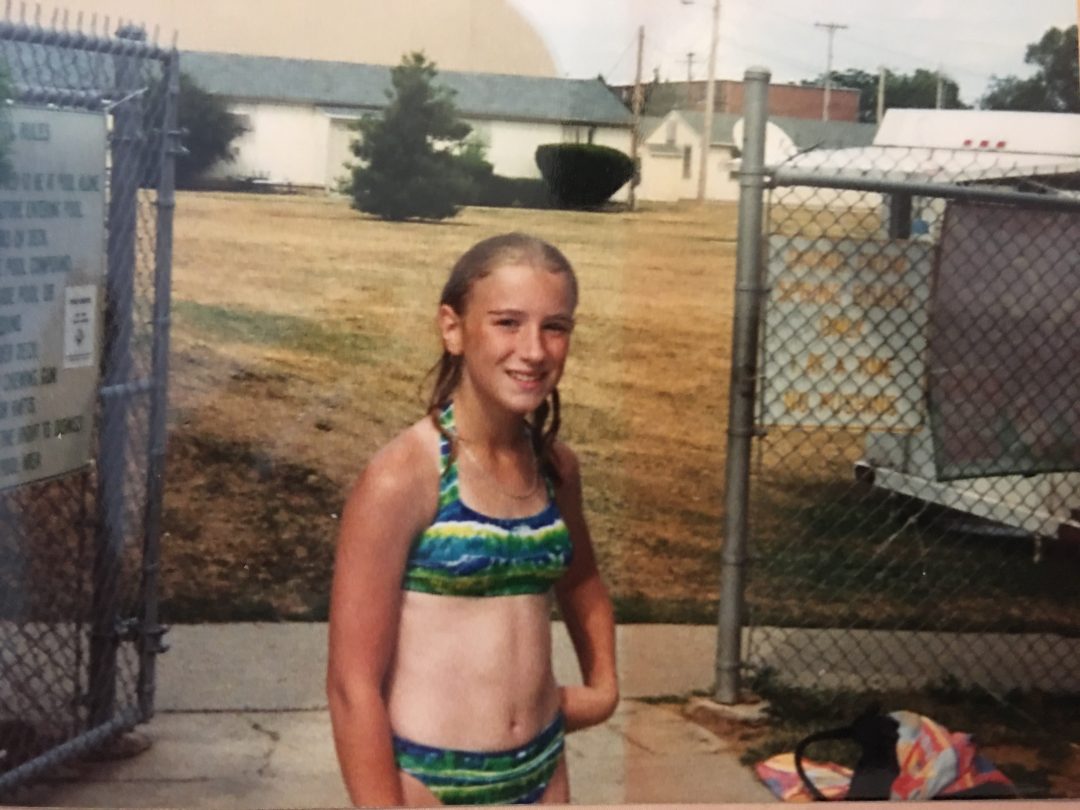 At some point in middle school I started to think I was fat, despite having defined abs. I made a comment to my parents one night that I thought my calves were too big. They were really just muscular. My parents looked perplexed. I don’t know if I actually thought they were too big but I thought it was normal to point out things you didn’t like about your body. I picked this up from my mom, sadly.For the next several years, till senior year in high school, I swam 2 hours 5-6 days a week on a competitive swim team. As far as my feelings about myself during this time, it was really a blur. I can remember feeling starving after swim practice and eating until I felt content. Still, I ate when I was hungry and stopped when I was full.

I ended my swimming “career” my senior year of high school because I felt like swimming was interfering with my ability to spend time with my boyfriend. I went from swimming 2 hours 5-6 days a week to just going to the gym with my mom here and there. That summer after senior year, I was at a party. A guy I knew from high school made a comment, which eventually made it to me, saying I was really packing on the pounds. I felt horrible. 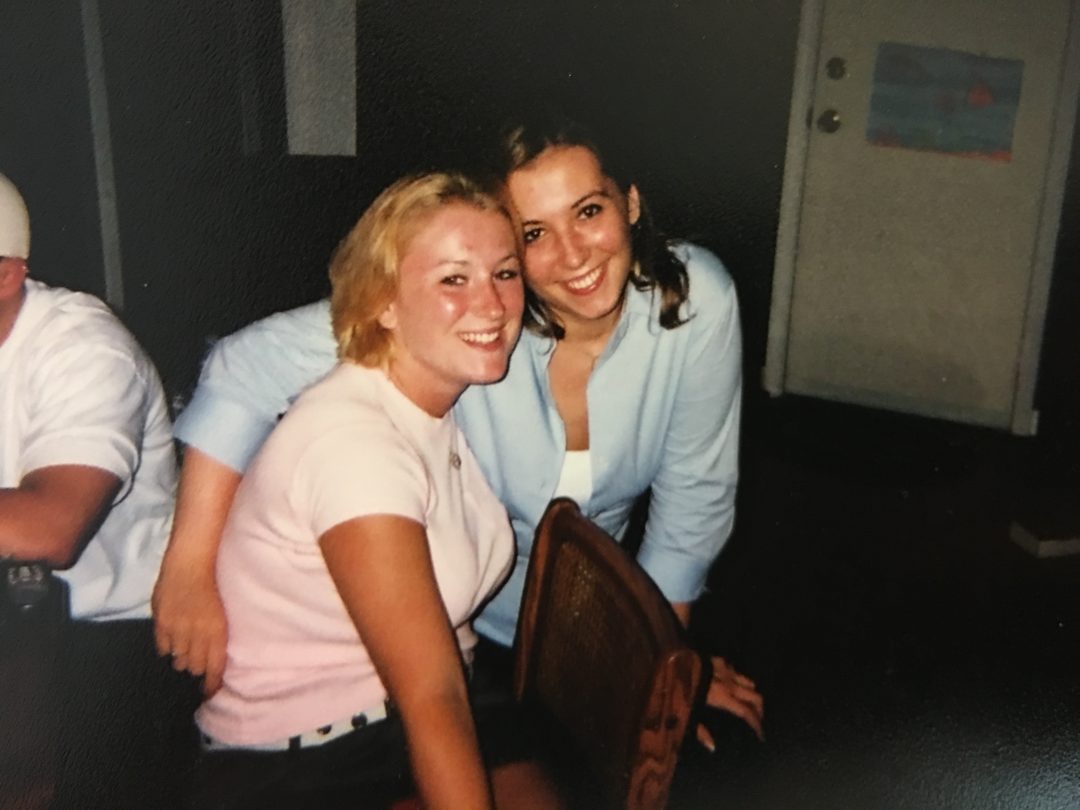 In the fall of 2002, I enrolled in culinary school. I went to Johnson & Wales University for my freshman year of college to study culinary arts. I loved to cook and had no idea what I wanted to do with my life so this seemed like the most logical path.

While in culinary school, I was in a cooking lab 7 hours a day. We were cooking gourmet meals that would eventually become our lunch or dinner. I was still eating as if I was swimming 2 hours a day and lived up to my nicknames. As you can imagine, the food combined with lack of exercise really started to pack on the pounds. Although I don’t know how much I gained, I would imagine at least 30 lbs. Unhappy with my looks was an understatement but I had no idea how to lose weight… none. My boyfriend at the time told me to just eat salads so I started ordering the most loaded up salads you could find. That didn’t work.

When Xenadrine, a diet pill, came out I thought I’d give them a try, starting with half a dose. It felt like I was going crazy because I was jittery all of the time. I took the pills for probably a couple weeks before people started commenting how skinny I was. During that time I likely lost about 15 lbs or more. I felt kind of strange that I looked so different and my clothes were about falling off of me but I was ok with it.

It wasn’t long after that I started to read online that people were having heart attacks, strokes and dying. All because of the main ingredient in these diet pills- Ephedra. I quickly threw the pills out and the weight came flooding back on almost as quickly and more some.

Head on over Part 2 , where I share with you how I dove head first into an eating disorder and didn’t even realize it. Stay tuned! In the mean time, if you think you’re struggling with a poor relationship with food, check out my blog article to find out.